From the River, to the Table, to the Parlor...

Saturday, September 13 -- Early this morning Neil Milne called Brent to let him know that the local branch was going to have a baptism. Since Arri was sick and Lucinda had been up since 2:00am, Brent and I quickly walked to the Branch to see the baptism. It was a fairly young man named Sergei and when he saw how many people were there (most of the Branch (about 12 people) and 6 Americans), he wanted to back out. He is a very shy man but the Elder from Armenia who is also the local Branch President talked to him and then we all jumped in a small bus and drove to the local river. It's interesting that the owner/driver of the bus isn't a member but he really likes the missionaries so he drives them all over for free. His name was Sergei too. 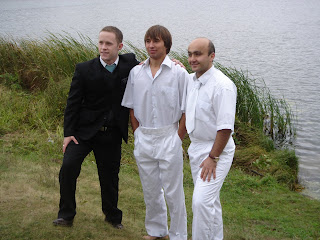 At the river we had a little difficulty finding a good spot where there wasn't either a fisherman, someone bathing, lots of cow remains or a pile of garbage that someone dumped. We finally found a good spot, said a prayer, sang a hymn and one of the sisters gave a talk on baptism. Then Sergei and the Elder/President went back to Sergei's car and changed into white clothing. They stepped into the water and after the prayer when the Elder tried to submerge Sergei, he was fighting going under so the Elder really had to shove him down! When he came up, he had a big smile on his face and when the Elder hugged him, he dunked the Elder! First time I've been to a baptism in a river and the first time I've seen the baptisee dunk the Elder! We then sang some more hymns out in the cold (I'm guessing about mid '40's) while they got dressed, heard another talk from Elder Doorman of Washington and then returned to the church for a testimony meeting. Afterward we ate some cookies and Pepsi. Overall another wonderful experience here in Ukraine. I wish my daughters could have experienced it as well as the boys. Also, for those coming here after us, bring an english hymn book if you plan to go to church. 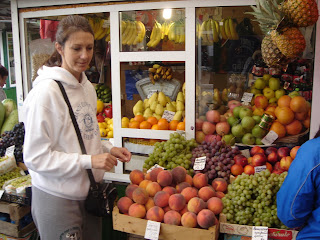 On the way back we met up with Arri and Lucinda who had been kicked out of the apartment by the cleaning lady. So, we ate a crepe from a street vendor and did some shopping for light bulbs (barely enough light in the apartment) and food for Sunday. We then went to the orphanage to pick up the kids and brought them back into town. The missionaries opened up the branch building for us and we played ping-pong for a couple of hours. We taught them chinese ping-pong and they had a good time with that. 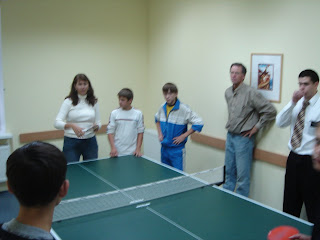 Afterwards we went to the local pizza parlor and ordered several pizzas. The boys ate quite a bit and seemed to enjoy themselves. Then they wanted Ice Cream but mistakenly ordered what I would call a dish of flavored whip cream. I got a real sugar buzz from it and 2 hours later I still feel stuffed!
Arri continues to suffer with her cold but has been a real trooper hanging with us all day. She's back on Motrin tonight and laying on the couch with her "Twilight" series book. It's the 4th book in the series and I think she's read this one only 3 times!! Who cares about vampires? I keep telling her they're not real but she insists her "Edward" is... 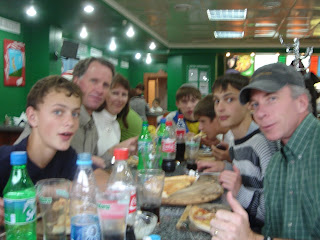 So great to be with the boys and every day we seem to grow closer. We were working with them on their english pronunciation of "3" which seems to be really hard for them. They also were laughing at me as I've been trying to just count to 10 in Ukrainski. Such great experiences that I only wish Maddie, Lauren and Cat could be here with us.
Posted by The Rogers Family at 10:20 AM

It was so exciting reading your blog. I am so touched by the experience that you are having that I can't wait till you get get home to share it with you. The boys look so tall. What happened? A year will do that I guess. Be safe. We love and miss you guys a ton!. The McCuties, Dave, Mia and Phil. Al and Marilyn too say hi.

It looks like you are having a great time with the kids and everyone else who is there adopting.

I'm sorry to hear that you are not feeling well. I hope you get better soon.

I was just wondering if you have seen Tonya and Sasha. If you do see them could you please take some pictures? 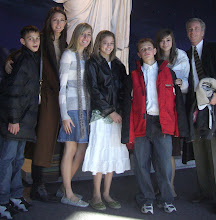